The unspoiled wilderness of the Northwest Territories and Nunavut is Canada’s largest frontier.

The unspoiled wilderness of the Northwest Territories and Nunavut is Canada’s largest frontier. These regions comprise over one-third of Canada’s area with less than 0.2% of the national population. Mineral finds encouraged settlers to come here. Mining forms the basis of their economy with fur trapping, fishing, and Native handicrafts to a lesser degree.

There are a number of significant park sites, including Nahanni National Park Preserve, Wood Buffalo National Park (partially in Alberta) and Quttinirpaaq National Park at the “top’’ of Canada. 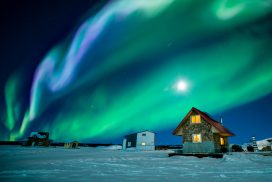 The city of Yellowknife is the capital of the Northwest Territories and Iqaluit, the capital of Nunavut, both boasting museums and cultural canters of the rich native ways of life. Baffin Island, the largest island in Canada, is a sanctuary for many animals including walrus and beluga whales. The Auyuittuq National Park is Canada’s first national park located north of the Arctic Circle and boasts Mt. Thor, featuring the world’s greatest vertical drop.