Sothern Saskatchewan is part of Canada’s breadbasket, producing more wheat than any other province in Canada and more than many countries.

In Canada, field peas and oats are important crops, but wheat is king. While agriculture still dominates Saskatchewan’s economy, minerals have grown dramatically in importance. The province’s potash and uranium reserves rank it among world leaders and petroleum production is rising rapidly. 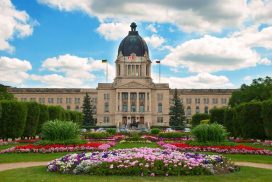 Regina is the provincial capital. Wascana Centre, a park containing the Saskatchewan Centre for the Arts, a waterfowl, the Museum of Natural History, the Legislative Building, and a university and sports centre, provides much to the city. Regina is home to the Royal Canadian Mounted Police with its training facilities, barracks and museum.

Saskatchewan’s major city to the north is Saskatoon. Here are a variety of museums and parks. The main branch of the Western Development Museum is here along with Battleford National Historic Park and, not far away, is the Batoche National Historic Site, Site of the crucial battle of the Riel Rebellion in 1885.

Saskatchewan’s geography is shown off at Prince Alberta National Park with 387,000 ha of semi-wilderness where animals roam the prairies and bush. Lake Athabasca holds vast desert like areas of sand dunes.