Quebec is both the wellspring and the storehouse of Canada’s French culture. While many other cultural groups have established themselves, French predominates.

Quebec has great physical beauty, aptly named “La Belle Province’’. It has vast forests, rocky, mineral –bearing soil and many lakes and rivers. Populations tend to cluster along the St. Lawrence River and waterways. The economy relies upon the natural resources; Quebec is a top world producer of pulp and paper. Gold, iron ore, copper, aluminum and more are extracted from its land, and Hydroelectricity is bountiful enough to export it to the USA. 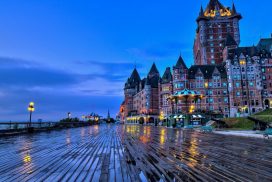 The provincial capital Quebec City has many historic sites and fabulous restaurants. It is the only walled city north of Mexico. Important spots include the Citadel, Place d’Armes, and Lowertown with Place Royale, the original colony now restored with 17th and 18th century buildings, cobblestone streets and horse drawn caliches. On the Plains of Abraham below the city. National Battlefields Park marks the site of the pivotal battle of Canada’s colonial era. Winter Carnival is not to be missed each February with its glittering ice sculptures, parades and parties.

Dominated by the picturesque Mount Royal, Montreal is the largest city in Quebec and is a living reminder of the city’s port origins and loving history. Sidewalk cafes, cobblestone streets, historic buildings, shops, and horse drawn caleches, all add to its charm. Pointe-a-Calliere Museum of Archeology and History, the Biodome and Insectarium, Montreal Museum of Fine Arts, and McCord Museum provide a variety of opportunities.

Beautiful scenery is Quebec’s great treasure. Forillon National Park on the Gaspe Peninsula has a rugged coastline and striking ocean views. The Laurentian Mountains offer some challenging skiing and resort areas like the Eastern Townships are famed for the lovely countryside, historic sites, antiques and the arts.