Ontario’s over 13 million citizens comprise over one-third of Canada’s total population. The nation’s capital city, Ottawa, sits within this province.

Niagara Falls is probably the most breathtaking border in the world as both the American and Canadian sides have their own falls. Nearby in picturesque Niagara-On-the-Lake, the Shaw Festival delights theater goers during the summer season. 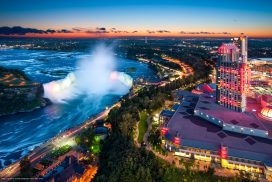 In Northern Ontario there are so many opportunities for trips, such as a train ride through Agawa Canyon. Thunder Bay is the western terminus of the St. Lawrence Seaway and the Great Lakes. Here ships are filled with wheat from Canada’s prairie provinces plus produce from Ontario’s forests and mines. Sudbury has a fabulous science centre, Science North, which includes tours of the adjacent Big Nickel Mine.

Ontario’s capital city is Toronto, the most multicultural city in the world with its great numbers of ethnic villages including four Chinatowns. Toronto is Canada’s financial, corporate and communications capital. Its impressive skyline includes the CN Tower, one of the world’s tallest freestanding structures. Other attractions include a thriving performing arts community, the Toronto Zoo and Ontario Science Centre, the Royal Ontario Museum and the Art Gallery of Ontario, the Air Canada and Rogers Centres sporting venues, and a variety of popular shopping hot spots.

Many attractions can also be found in major Ontario cities such as Kingston, Hamilton, London, and Stratford.