Nova Scotia, almost completely surrounded by the sea, has a distinctive Maritime personality.

Nova Scotia is a land of quiet fishing villages, historic towns, old forts and museums, beaches and seascapes, farmland and forest. No matter where you venture to in the province, you are never more than 65 km from the sea.

Halifax is not only the provincial capital but also the commercial and financial capital of the entire Maritime region. It has a large and busy harbor and is headquarters for Canada’s Atlantic Navy. The renovated buildings, cobblestone streets and the voice of the “town crier’’ of the Historic Properties recreate life in the 19th century along the city’s waterfront. 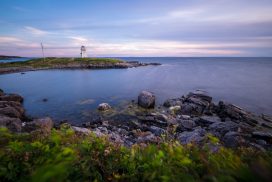 A glimpse into the province’s past can be had at Annapolis Royal in the picturesque Annapolis Valley, famed for its apple orchards. The entire town is a National Historic Site and preserve the style and flavor of colonial life. The famous Cabot Trail highway borders the Cape Breton Highlands National Park, offering spectacular views of the coastline. On Cape Breton is the Fortress of Louisburg National Historic Site. It is now a replica of life in the 1740s.

On the other side of Nova Scotia, Peggy’s Cove is probably one of the most photographed sites in Canada with is colorful fishermen’s homes and grand lighthouse. Further down the shore is Lunenburg, home to the Blueness ll. The old town with its beautifully-preserved colonial buildings is now a UNESCO World Heritage Site.