Most of Newfoundland’s population is descendent from Southwest England and Southern Ireland.

Nicknamed “The Rock’’, Newfoundland boasts rugged cliffs, majestic mountain ranges, and more lakes and rivers per square kilometer than any comparable are in North America. Labrador is a virtual wilderness of evergreen forests, rivers and thousands of small lakes. Churchill Falls Supplies hydro power to millions.

A coastal drive shows one spectacular sea view after another. Newfoundland’s rugged beauty is on display at Gros Morne National Park where barren, and, in particular, the off-shore oil industry is. 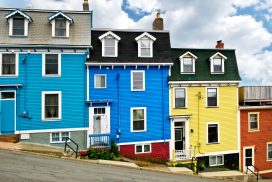 Most of Newfoundland’s population is descendent from Southwest England and Southern Ireland. Native Newfoundlanders have distinct accents, a remarkable Variety of dialects, and a vibrant, distinctive culture, developed in part by their isolated maritime way of life. Life here is rich in folklore and tradition.

St. John’s is North America’s oldest city and the commercial and cultural heart of the province. The Old City and Harbour, with its narrow streets and brightly painted houses delight the eye, as do its many historic buildings. Immerse yourself in culture at The Rooms, Newfoundland and Labrador’s largest public cultural space.

Newfoundland’s colorful history is honoured in several National Historic Site is one of the last French-English battle sites in North America. Castle Hill commemorates the French fishing and military presence in Newfoundland. L’Anse aux Meadows, the oldest known European settlement in the New World and a UNESCO World Heritage site, is the sole confirmed Viking site in North America.