New Brunswick treasures its history and its geography. From Magnetic Hill where cars appear to coast uphill, to 8 metre tides at the Bay of Fundy, New Brunswick has quite the sites.

The Fundy Islands accommodate thousands of visitors annually. Campobello is well-known as the summer retreat of President Roosevelt, whose cottage has been preserved as part of a Canadian-American International Park. Hopewell Cape, on the Bay of Fundy, is known for its curious “Flowerpot Rocks’’ formation. Kouchibouguac National Park has forest, salt marshes, sand dunes and tidal lagoons while Fundy National park is a spectacular setting of forest and cliffs from which to observe the world famous tides. 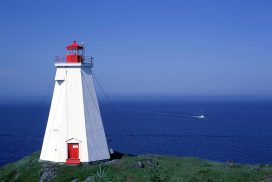 The region’s first European settlers were Acadian French and today about one-third of New Brunswick’s citizens are francophone. The Village Historique Acadien coastal region re-creates the Acadian way of life from 1780-1880 period and explore Fort Beausejour, a National Historic Site.

Saint John was founded by Loyalists fleeing America. It is one of the country’s busiest ports and shipbuilding centers. The province’s key pulp and paper production, mineral wealth and agricultural bounty flow through the port of Saint John has an interesting downtown with historic warehouse and shopping along with numerous museums and historic sites.

Fredericton, the provincial capital, dates from 1784. It has preserved many areas of historic interest, such as the Officer’s Square, Military Compound and the nearby King’s Landing Settlement.

A popular resort area St. Andrew’s-By-The-Sea is a picturesque historic town. Now a centre for marine biological research, it is home to the Huntsman Marine Laboratory Museum and Aquarium, and the St. Andrew’s Biological Station.