Manitoba has abundant waters and fertile soil that led so many settlers to work the land and create many multicultural communities that thrive today.

Winnipeg is the provincial capital and has been a key transfer and trading point since its foundation. It has enormous modern rail yards, a huge commodity exchange and vast stockyards. A branch of the Royal Canadian Mint is located here, as is the Ukrainian Cultural Centre, the Canadian Museum for Human Rights and the Museum of Man and Nature, a part of the Centennial Centre complex. Winnipeg is home to several professional performing arts companies including the world renowned Royal Winnipeg Ballet and the Manitoba Theater Centre.

Near Winnipeg is Lower Fort Garry National Historic Site which preserves many artifacts from Manitoba’s trading past. 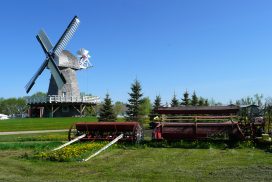 The city of Churchill, on Hudson Bay, is Canada’s most northerly deep-sea port. It is home to superb museums, with a priceless collection of Inuit carvings, and the restored massive stone fortress of Fort Prince of Wales National Historic Site and the York Factory National Historic Site. Just south of town is the world’s largest denning area for polar bears.

While manufacturing leads the economy of Manitoba, agriculture is nearly as important. Over one-third of the province’s farmland is used to grow wheat. Mining is of major importance as well, with the city of Flin Flon serving as the centre.