Seventy percent of beautiful B.C.’S people live in the Victoria or Vancouver areas. Victoria is the provincial capital and second largest city in British Columbia. It has preserved a civilized pace as part of its Victorian heritage. Take time to enjoy the Royal British Columbia Museum, afternoon tea and the city’s floral delights.

Vancouver was first settled by Europeans in 1862, and became the province’s major commercial centre after the Canadian Pacific Railway located its western terminus here in 1886. 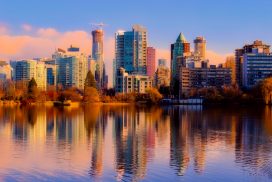 View the city from a few vantage points. Go through the download’s 1000-acre Stanley Park (a national historic site), then drive across Lion’s Gate Bridge and take the aerial tramway to the top of Grouse Mountain and its spectacular view. Vancouver has much more than scenery. Historic Gastown and extensive Chinatown add character. Ships bring cargoes from around the world and leave with the prairie’s grains and B.C.’s minerals and lumber. Its climate and topography provide virtually unlimited recreational opportunities. And as one would expect from Canada’s third largest city, it has much to offer in culture and entertainment. Consult B.C. Ferries, Rocky Mountaineer or VIA Rail for the destinations available to explore so much of the coast of B.C.

Vancouver Island features spectacular views of the Coastal Mountains on mainland B.C. Generally, the island’s east coast has wide beaches and gentle slopes while the west coast is indented with fjords. See some of the world’s largest trees in Pacific Rim National Park Reserve. Gwaii Haanas National Park Reserve and Haida Heritage Site, on the Queen Charlotte Islands, features a UNESCO World Heritage Site. Four of B.C.’s six National Parks are in the interior. Each is spectacular. Yoho National Park’s mountains include a 380 metre waterfall and a natural bridge over the Kicking Horse River. Mount Revelstoke, Glacier and Kootenay all boast breathtaking views.

Skiers who don’t find the regular runs at Whistle challenging enough can take helicopter rides to white powder snow of inland regions at near the Rockies.