Alberta has it all: towering mountains and sparkling city towers, dinosaur bones and oil pumps, the peace of the river valley, the hoof beat clatter and cowpoke whoop of a chuck wagon race. It has vast natural resources, based on a which several industries thrive in the province. Home to two of Canada’s largest cities – Calgary and Edmonton – it is the most populated prairie province of the country.

Modern Alberta dates from the discovery of oil at Leduc in 1947. Alberta’s leadership in energy production is secure since the Tar Sands hold enough oil reserves to take care of the country’s needs of decades. 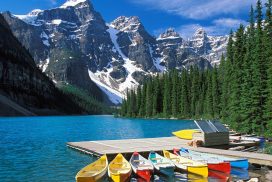 Calgary, in southern Alberta, was originally a trading post in the foothills of the Rockies, where the Bow and Elbow Rivers flow together. It is now the administrative centre of Canada’s oil and gas industries. Calgary celebrates its rough and ready history in the Stampede, ten days of frontier festivities in early July.

Edmonton, the provincial capital, is the focus for northern Alberta. It is a grain-handling and meat-processing centre in the middle of a rich agricultural area, and, is the production centre for the province’s oil and gas industry. Edmonton grew rapidly as a jumping-off point during the Gold Rush and celebrates this with a bash in July called Klondike Days. The West Edmonton Mall, one of the world’s largest and most amazing shopping-entertainment complexes, is the attraction that most surprises visitors.

Interesting areas to visit in Alberta include: Cardston, with one of the few Mormon temples in the world; Cypress Hills Provincial Park and nearby Head-Smashed-In Buffalo Jump, a UNESCO World Heritage Site where Native Peoples drove buffalo over the cliff for thousands of years.

Albertans are justly proud of the province’s natural beauty. The Badlands of the Red Deer River are home to Dinosaur Provincial Park, with its caverns and hoodoos. A World Heritage Site, it is the richest area of dinosaur bones in the world. Amidst the Badlands, the town of Drumheller is home to the Royal Tyrrell Museum and the start of the Dinosaur Train Circular Drive. The Rockies are showcased in Banff, Canada’s first National Park. Just north of Banff, Jasper also boasts spectacular scenery, with its soaring snowy mountain peaks, deep gorges and numerous lakes.