Every month, we publish a news article that gives you a holistic view regarding the draws conducted by various Canadian provinces (Provincial Nominations; PNP draws), in the previous month. While this article is regarding August month’s provincial selections or draws, you can read about July month’s in this article published. In August 2022, Immigration, Refugees, and Citizenship Canada (IRCC) conducted several draws targeting provincial nominee candidates. Over 4,699 invitations were issued by various Canadian provinces [directly]. Most provinces and territories have at least one provincial nominee program aligned with the Federal Express Entry selection system. 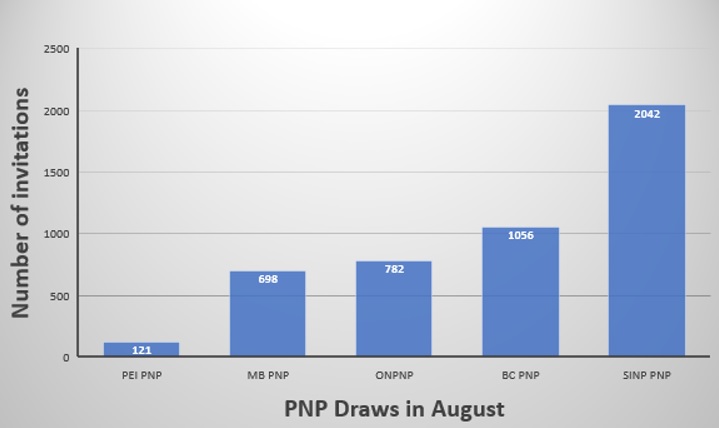 British Columbia held a total of 3 draws in August, inviting 1,056 candidates to apply for provincial nomination through Express Entry BC and skills immigration streams. In July 2022, British Columbia had held 4 draws & a total of 665 candidates were issued invitations. We had published an article on our website, which you can access here.

The province held 2 draws (on August 11th & 26th), under two streams: Skilled Workers in Manitoba, and the International Education Stream. A total of 698 Letters of Advice to Apply (LAAs) were issued, out of which 165 applicants had a valid Express Entry profile at the time of invitation. In the month of July, the province had issued a total of 732 invitations. You can read about July’s month’s draws here.

The province of PEI, through the Prince Edward Island Provincial Nominee Program (PEI PNP) invited a total of 121 candidates on August 18.

Ontario – one of the most populous provinces & a preferred destination for newcomers – held a draw on August 30, under three streams, namely: Skilled Workers, International Education Stream, and Skilled Workers Overseas. A total of 782 Notifications of Interest (NOIs) were issued in this draw. In the month of July, the province had issued a total of 755 invitations. You can read about July’s month’s draws here.

The province of Saskatchewan, through its Saskatchewan Immigrant Nominee Program (SINP) held invitation rounds on August 11, 18, & 25. A total of 2,042 candidates were invited to apply for a provincial nomination in these draws. Saskatchewan issued 682 invitations in the previous month, regarding which you can read here.

In August, no draws were conducted by New Brunswick, Newfoundland and Labrador, Nova Scotia, Quebec and Alberta.