The province of British Columbia [typically] conducts draw on weekly basis. The province issued a total of 655 invitations in the month of July, 6% more than the previous month wherein the total number of invitations closed at 615.  We had published an article on our website, which you can access here.

A total of 732 invitations were issued under the Manitoba Provincial Nominee Program draw in July. This is a 30.6% increase in the number of invitations issued in the previous month, 508. We had published an article on our website, which you can access here.

PEI, through the Prince Edward Island Provincial Nominee Program (PEI PNP) invited a total of 165 candidates in July. In the month of June, a total of 136 invitations were issued. The % increase in invitations stands at 17.5. We had published an article on our website, which you can access here.

In July month, the province of Ontario, through its Ontario Immigrant Nominee Program (OINP) issued a total of 755 Invitations to Apply (ITAs) to candidates with a CRS Score of 310 and above.  509 Invitations were issued by the province in the previous month. We had published an article on our website, which you can access here.

Saskatchewan, through the Saskatchewan Immigrant Nominee Program (SINP) published invitation round results for July. The draws featured a total of 682 invitations, with a minimum score of 73 – in Saskatchewan selection grid. Saskatchewan did not issue any invitations in the previous month. We had published an article on our website, which you can access here.

Alberta issued a total of 120 invitations in July under the Alberta Advantage Immigration program. In the month of June this year, the province had issued a total 150 invitation. We had published an article on our website, which you can access here.

In July, no draws were conducted by New Brunswick, Newfoundland and Labrador, Nova Scotia, & Quebec.

Draws were held on July 6 and July 20 under Express entry. A total of 3,250 Invitations were issued, for which the Comprehensive Ranking System (CRS) was 557 and 542 respectively.

The below chart shows data of all PNP draws that were held in July 2022. 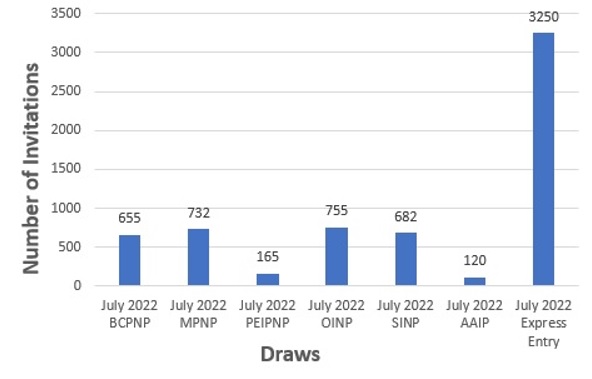 Provincial Nominee Programs are fast-tracked Canadian immigration programs and provide a unique pathway to immigrate to Canada. There are two types of provincial nomination programs: