In May 2022, Immigration, Refugees, and Citizenship Canada (IRCC) conducted several draws targeting provincial nominee candidates. Over 2,477 invitations were issued to candidates [by the various Canadian provinces and Express entry draws]. Most provinces and territories have at least one provincial program aligned to the Federal Express Entry selection system.

Highlights of Provincial Nominee Program Draws in May 2022

All Canadian provinces and territories (except Quebec and Nunavut) operate their own Provincial Nominee Programs. Having their own migration programs allow provincial governments to select most suitable candidates to meet their local labour market needs.

Draws were held on May 5 in Manitoba, under three streams, namely: Skilled Workers in Manitoba, International Education Stream, and Skilled Workers Overseas. A total of 315 Letters of Advice to Apply (LAAs) were issued, out of which 48 applicants had a valid Express Entry profile at the time of invitation.

Draws that were held on May 20, were exclusively for applications from Ukraine. A total of 13 Letters of Advice to Apply (LAAs) were issued in this draw. Previously in the month of April, the province had held 3 draws (1 of which was for Ukraine), inviting a total of 546 candidates (20 of which was for Ukrainian applicants). We had published an article on our website, which you can access here.

British Columbia held a total of 4 draws in the month of May, inviting 664 candidates to apply for provincial nomination through Express Entry BC and skills immigration streams. In April 2022, British Columbia had held 5 draws & a total of 670 candidates were issued invitations. We had published an article on our website, which you can access here.

In May, no draws were conducted by Alberta, New Brunswick, Newfoundland and Labrador, Nova Scotia, Ontario, and Quebec.

Draws were held on May 11 and May 25 under Provincial Nominee Program (PNP). A total of 1134 Invitations were issued, for which the Comprehensive Ranking System (CRS) was 741 and 753 respectively.

The below chart shows data of all PNP draws that were held in May 2022. 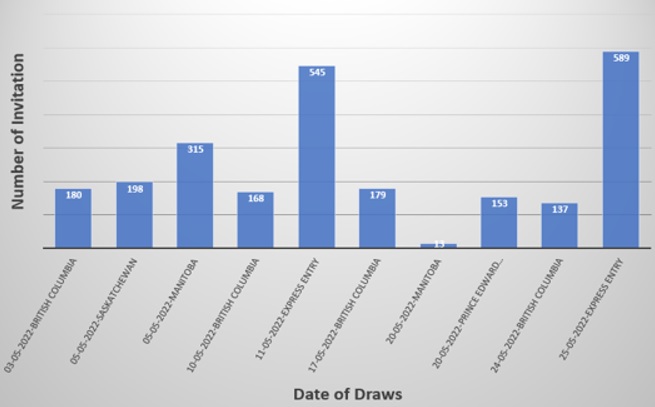 Enhanced nominations: these streams are linked with the Express Entry system. Suitable candidates are searched by the provincial immigration officials who match specific criteria. These provinces then invite the eligible candidates to apply for provincial nomination.