Draws were held on June 16, 2022, in Alberta. 150 Notifications of interest (NOIs) were issued. The Comprehensive Ranking System (CRS) of the lowest-ranked candidate in the Express Entry profile was 306 at the time of invitation.

British Columbia held a total of 4 draws in June, inviting 615 candidates to apply for provincial nomination through Express Entry BC and skills immigration streams. In May 2022, British Columbia had held 4 draws & a total of 664 candidates were issued invitations. We had published an article on our website, which you can access here.

Draws were held on June 2 in Manitoba, under two streams, namely: Skilled Workers in Manitoba, and the International Education Stream. 146 Letters of Advice to Apply (LAAs) were issued, out of which 34 applicants had a valid Express Entry profile at the time of invitation.

In June, no draws were conducted by New Brunswick, Newfoundland and Labrador, Nova Scotia, Quebec, and Saskatchewan.

Draws were held on June 8 and June 22 under Provincial Nominee Program (PNP). A total of 1,568 Invitations were issued, for which the Comprehensive Ranking System (CRS) was 796 and 752 respectively.

The below chart shows data of all PNP draws that were held in June 2022. 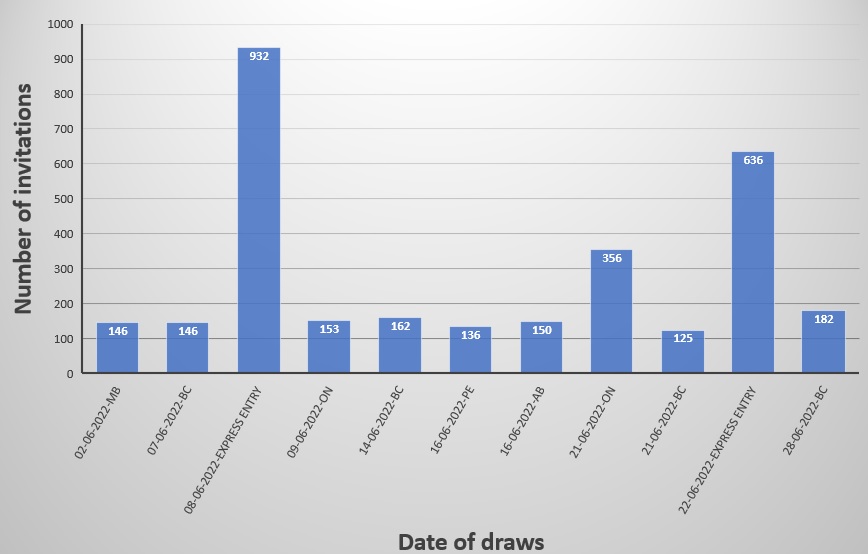