On July 22, a total of 4,500 Express Entry candidates were invited to apply for Canadian permanent residence. The candidates required a score of at least 357 and had to be eligible for the Canadian Experience Class (CEC) to be invited.

Candidates who had submitted their profiles before February 14 at 09:04:15 UTC (as per the Immigration, Refugees and Citizenship Canada’s (IRCC) tie-break rule) received invitation in this draw. IRCC publishes a cut-off time as per the administrative requirements regardless of an actual tie. In the preceding draw, candidates with a score of 369 were invited. And in the draw before that, 357 was the score requirement. The lowest score was 75 in the CEC draw held on February 13, 2021.

Since the pandemic started, IRCC has been focusing on CEC and Provincial Nomination Program (PNP) specific draws, as it is more likely that these candidates would travel to Canada without being disrupted by public health measures like travel restrictions. Canada has plans to invite 401,000 new migrants this year, following their immigration levels plan. About a quarter of these new migrants are expected to be from Express Entry. Canada has already invited twice the number of Express Entry candidates as compared to the same time last year. Many candidates invited this year was because of the historic February 13 draw for CEC candidates wherein a total of 27,332 people were invited. The graph below shows the number of Invitation to Apply (ITAs) issued to date in 2021, compared to 2020. 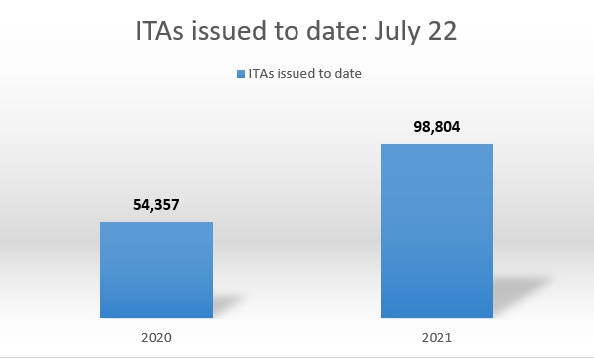 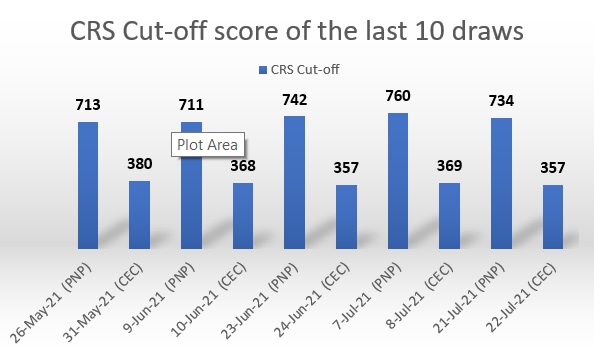 The above graph shows the Comprehensive Ranking System (CRS) cut-off score for the last 10 draws in CEC and PNP categories respectively. CEC and PNP draws have different score requirements. PNP candidates accrue an additional 600 points that is automatically added to their score on receiving a provincial invite (provincial nomination). The CEC stream does not compete with other streams allowing IRCC to dip their cut-off scores to lower levels.