In the latest Express Entry draw, Canada invited 1,002 immigration candidates to apply for permanent residence. The invited candidates had received nomination through any one of Canada’s  Provincial Nominee Programs (PNPs).

The Comprehensive Ranking System (CRS) cut-off score for this specific EE draw was 742, a relatively high score as PNP candidates in the Express Entry pool automatically receive 600 points in addition to their actual CRS score. In this new draw, candidates with a minimum score of 742 were invited if they had submitted their Express Entry profile before February 18, 2021, at 04:04:56 UTC. This is as per Immigration, Refugees, and Citizenship Canada’s (IRCC) tie-break rule. IRCC publishes a cut-off time as per the administrative requirements regardless of an actual tie. Canada had invited 940 PNP candidates in the previous PNP-only draw, about which you can read here.

Despite the travel restrictions, Canada’s federal government has planned to admit a record-breaking number of new immigrants through Express Entry aligned programs in 2021 alone. The total number of candidates who have been invited this year (till date) is almost twice compared to last year’s. This year saw the historic 13 February draw, where IRCC invited every candidate who was eligible for the Canadian Experience Class (CEC) – a one of its kind draw, that saw a staggering number of 27,332 people receiving permanent residence invitations. Of these, around 87 percentage of candidates applied for permanent residence before the 90-day deadline also, according to the IRCC.

The graph below shows the number of Invitations to Apply (ITA) issued this year (till date) compared to last year. 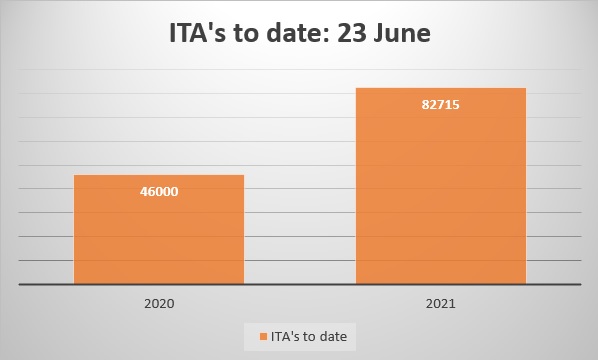 The PNP and CEC draws have different score requirements. The PNP- only draws usually have high-score requirement because, 600 points are added automatically to the candidates’ actual CRS score, which in fact is calculated based on the candidate’s various circumstances & credentials, like age, education, number of years of work experience, proficiency in English and/or French language, etc. In comparison, the CEC-only draw score requirements are much lower, allowing more candidates to apply for permanent residence. The graph below shows the CEC and PNP draw cut-off scores for the last 10 draws. 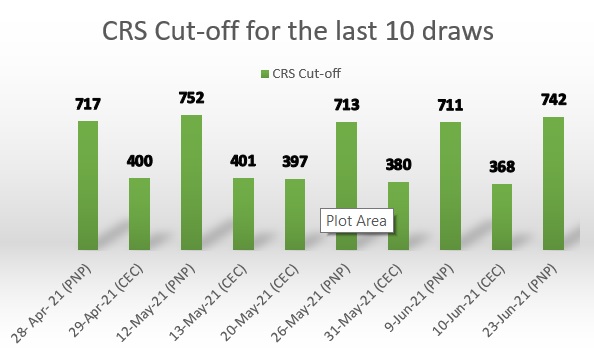 Since the coronavirus outbreak in March 2020, IRCC had been, primarily, holding PNP and Canadian Experience Class (CEC)  draws. However, Federal draws for popular skilled migration programs like the Federal Skilled Worker Class (FSWC) have now resumed and expected to recur more frequently as the nation relaxes its various travel restrictions.

The sudden prioritization of PNP & CEC specific draws, as per seasoned immigration lawyers, was to address the sudden ‘localized’ labour shortages that the various Canadian provinces started facing as part of the pandemic outbreak – primarily in sectors like healthcare, Information Technology (IT), etc. As it can be drawn from the graph above, CEC and PNP specific draws were being conducted frequently compared to Federal draws so that it would be easier for the provinces to immediately address their localized labour shortages.

More number of candidates are now receiving Notification of Interest (NOI) from different provinces in their express entry profile. There is a significant increase in the number of such invitations issued this year, compared to previous years. Upon receiving an NOI, eligible candidates can apply for a provincial nomination. Nominated candidates under this, or any other Express Entry-aligned Provincial Nominee Program (PNP), will be automatically pushed to the front of the line as their CRS scores see a sudden hike. This triggers an Invitation to Apply (ITA) [most likely in the very next EE draw itself because the candidate’s score has increased by an astounding 600 points], which will eventually lead to the candidate securing permanent residence through Express Entry. This news comes as a great relief for potential aspirants who are awaiting an invitation in the Express Entry pool.

Provincial Nominee Programs are fast-tracked Canadian immigration programs established to suffice the immigration requirements of the participating province or territory. You can read more about provincial nominee programs here.

Express Entry is an electronic selection system used by the Federal as well as Provincial governments of Canada [to select], as well as designated Canadian employers [to nominate] candidates for Canadian permanent residence  under three of its popular economic [skilled] immigration programs:

Check out Owlspriority Immigration’s Canada Settlement Resources to learn more about             ways to find a new job in Canada, making your initial days in Canada stress-free and confident, etc.