In the latest Express Entry draw that was held on September 29, Canada invited 761 Express Entry candidates to apply for permanent residence. The candidates invited had previously received nominations through any one of the Provincial Nominee Program (PNP) which automatically added 600 points to their base Express Entry score. Thus, the Comprehensive Ranking System (CRS) score for this draw was 742 points to receive an invitation.

In the previous Express Entry draw held this month on September 17, 521 PNP candidates with a CRS score of 732 or higher were invited. A higher cut-off score may suggest that more high scoring candidates are there in the provincial pool and they can expect to receive an invitation in any of the upcoming draws.

This was the 19th Express Entry draw held for PNP candidates this year. Immigration, Refugees, and Citizenship Canada (IRCC) has over-achieved its target of sending 108,000 invitations this year. The graph below shows the total number of Invitations to Apply (ITAs) issued so far this year, compared to last year’s statsitics. 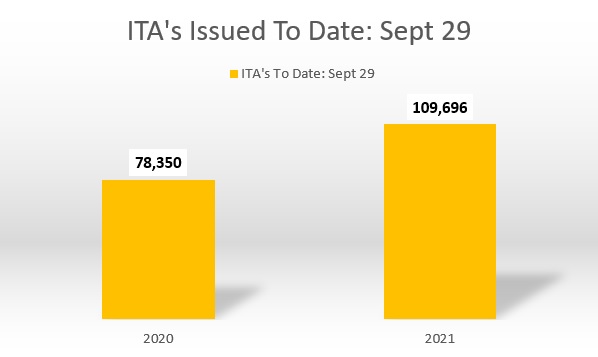 The minimum CRS score requirement vary for PNP and CEC draws. PNP draws have higher CRS cut-off score requirement due to the automatic addition of 600 points to the candidate’s Express Entry profile on receiving a nomination from the province. On the other hand, CEC draws have comparatively lower CRS score cut-off since the draw is concentrated on a specific group of people. However, these streams do not compete with Federal Skilled Worker Class (FSWC) specific Express Entry draws. The graph below shows the CRS score cut-off scores for the last 10 draws. 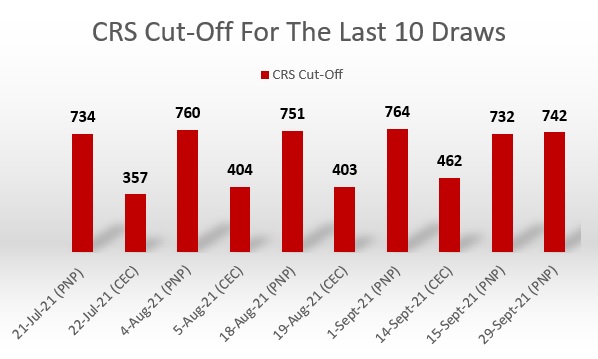