Prepared by Veronica Laurent; Shreeya A Pal; Edited by Peter Seeder on December 27, 2021

Canada held another Provincial Nominee Program (PNP) draw on this 22 December inviting 746 Express Entry candidates to apply for permanent residence. The invited candidates required a minimum Comprehensive Ranking System (CRS) score of at least 720 to receive an invitation. All candidates invited held a provincial nomination which automatically added 600 points to their base Express Entry scores.

IRCC had invited a record-breaking 1,032 PNP candidates to apply in the previous draw. In that draw, the minimum score requirement was 698.

In respect of the federal government’s immigration agreements with provinces and territories, IRCC has continued to invite PNP candidates. Although the federal government has the final say on who gets permanent residence and citizenship, provinces can nominate newcomers who can help them meet their population and economic growth goals. According to studies and accompanying statistics, both PNP and CEC candidates perform well in the job market.

Records taken from October and November reveal that the IRCC has been processing 1700 Provincial Nominee Program (PNPs) applications per month. This year, a record number of candidates have been issued invitations. Nearly 114,431 candidates have received Invitations to Apply (ITAs) as compared to last year wherein only 102,350 ITAs were issued. The graph below shows the number of ITAs issued to date, as compared to last year. 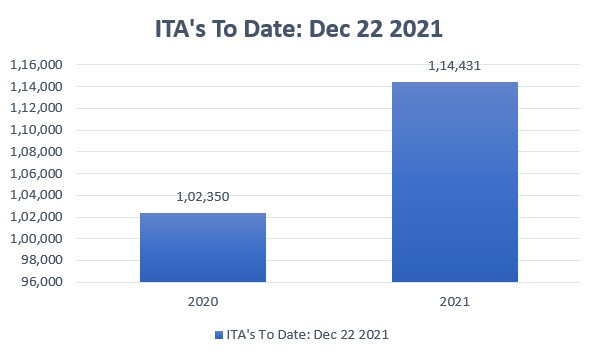 The minimum CRS score requirement varies for PNP and CEC draws. PNP draws have a higher CRS cut-off score requirement due to the automatic addition of 600 points to the candidate’s Express Entry profile on receiving a nomination from the province. On the other hand, CEC draws have a comparatively lower CRS score cut-off since the draw is concentrated on a specific group of people. However, these streams do not compete with Federal Skilled Worker Class (FSWC) specific Express Entry draws. The graph below shows the CRS score cut-off scores for the last 10 draws. 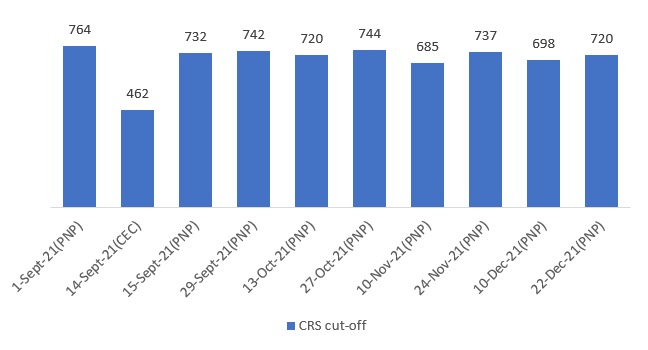