In the week the survey was conducted, public restrictions across Canada had diminished due to low case counts and high rates of vaccination. The survey concentrated on full-time jobs, especially the private sector in service industries. 94,000 jobs were added by Canada in the month of July, matching employment levels to that of February 2020 (1.3 percent rise) and the unemployment rate fell to 7.5 percent matching the rate of March 2020. Ontario, Manitoba, Prince Edward Island, and Nova Scotia were some of the provinces that saw a rise in employment last month. The graph below shows the increase in employment rates in these provinces. 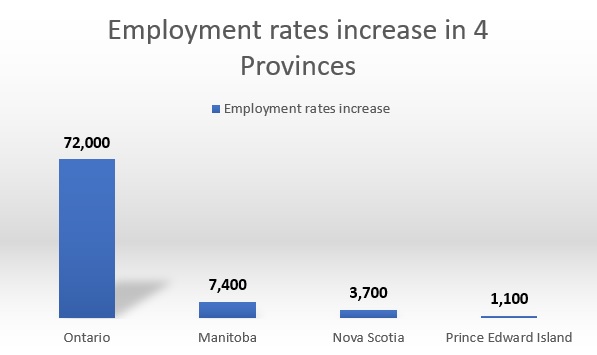 Canada is a country with an aging population and a low birth rate and a combination of this has a direct impact on the labour force. Hence without migration strategies, Canada will face challenges in its demographic.

According to Statistics Canada, the country welcomed 35,700 new permanent residents during June as the travel restrictions eased and borders reopened. The labour market is expected to continue its growth in the coming months as Canada will welcome more new migrants with Canada’s target to welcome new permanent residents being 80,000 for the year 2021.