Prepared by Veronica Laurent; Shreeya A Pal; Edited by Peter Seeder on November 13, 2021

Canada held its latest Provincial Nominee Program (PNP) specific draw on November 10, 2021, inviting 775 Express Entry candidates to apply for permanent residence. The invited candidates required a minimum Comprehensive Ranking System (CRS) score of 685 to receive an invitation. This draw had the second-lowest cut-off score in this category since IRCC started conducting PNP-specific draws. All the candidates who were invited in this draw held a provincial nomination certificate which automatically added 600 points to their base Express Entry CRS score. 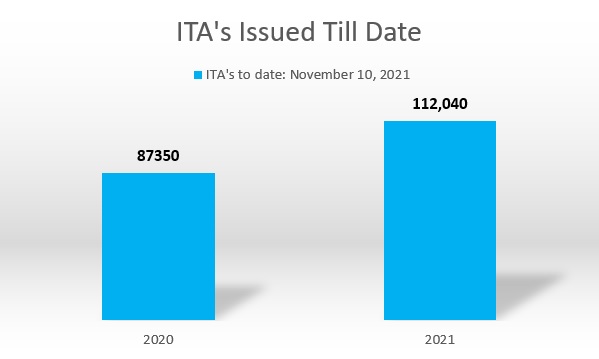 From January 2021, IRCC hosted several Express Entry draws for PNP and CEC applicants. While CEC applicants are most likely already in Canada, PNP candidates have successfully demonstrated to a Canadian province or territory that their immigration will enhance the region’s economy. The volume of invitations (NOIs/LAAs) issued by various Canadian provinces have increased by almost 150%. Experts working in the domain see this spike a result of pandemic-induced localized labour shortage. Professionals working in the fields of healthcare, IT (Information Technology) & social welfare, benefits from the sheer volume of invitations issued by select provinces, especially, Ontario.

The minimum CRS score requirement vary for PNP and CEC draws. PNP draws have higher CRS cut-off score requirement due to the automatic addition of 600 points to the candidate’s Express Entry profile on receiving a nomination from the province. On the other hand, CEC draws have comparatively lower CRS score cut-off since the draw is concentrated on a specific group of people who are most likely inside territorial Canada. However, these streams do not compete with Federal Skilled Worker Class (FSWC) specific Express Entry draws. The graph below shows the CRS score cut-off scores for the last 10 draws. 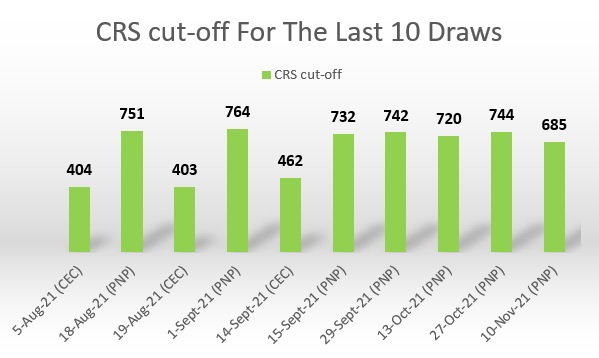