Migration to Canada | Indians Topping the Chart at 42%

Whilst several nations around the world are closing their doors to refugees and building barriers, outsiders continue to be accepted by Canadians. Canada is one of the few countries not to have a dominant political party with anti-immigrant policies in North America and Europe. 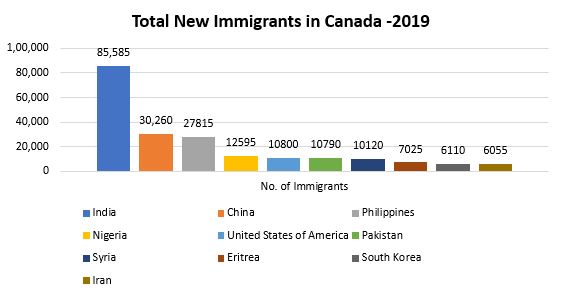 The OECD report shows that, even for foreign-born men and women, long-term unemployment is relatively low, which is a reason why Canada attracts high immigration candidates. The OECD points to several other elements also that could attract migrants, such as more public acceptance of different backgrounds and the “anti-racism culture” of Canada.

Immigration, Refugees and Citizenship Canada revised the policies on newcomer selection and sponsorship to be more inclusive and diverse in 2018-19.

Canada has an exceptional quality of life and a clear need for immigrants. Access to a universal healthcare system, free primary and secondary education, and a robust economy and work market for citizens and permanent residents. All of this in a nation ranked as one of the world’s safest, with a limited population density, which means plenty of space and access to nature.

The United States of America’s current policies on immigration has made it even harder for immigrants in general, and particularly targeted visas that are popular among Indians. This has led to fewer Indians choosing the US, whether to study or work in.

In the same time, Canada has introduced a plethora of different programmes to attract migration, in particular, its Express-Entry scheme, which provides permanent residency invitations to highly qualified workers, even if they have not obtained employment in the country. A significant number of Indians have relied on this system, as well as Canada’s Global Talent Scheme which allows companies to process work permits and visas in a matter of weeks.

Whilst the Canadian lifestyle could be a significant factor for popularity of Canadian immigration among Indian aspirants, another would be the simplicity of the Canadian Immigration process.