Express Entry candidates who received a provincial nomination were invited in the new Express Entry round of invitations.

On 22 July 2020, Canada welcomed 557 Express Entry applicants to apply for permanent residence. So far this year, Canada has admitted a total of 54,357 applicants.

In the current draw, only candidates who had secured a selection through a Provincial Nominee Program (PNP) were invited, which is why the Detailed Ranking System (CRS) cut-off score specific to the draw was 687. This is the lowest PNP-specific Express Entry cut-off score so far in 2020.

All the candidates who were nominated by provinces received a bonus 600 points that was added to their overall CRS score. This means that candidates receiving the ITA in this round would require a CRS score of at least 87 for their human capital without the provincial nomination.

It is the ninth PNP draw since Canada closed its borders on March, in a bid to avoid the spread of COVID 19 pandemic. The invitation rounds conducted by the Express Entry program have adopted a trend where draws will alternate between target candidates with provincial nominations, and those from the Canadian Experience Class (CEC). The first all-program draw since the start of the pandemic was held earlier this month.

Express Entry draws targeting CEC candidates generally have a much lower CRS cut off. Since this March, in CEC draws the CRS cut-off scores have declined steadily (see the statistical graph below), with the recent CEC draw having seen the year’s lowest CRS cut off score.

As usual, the recent Express Entry draws also saw Immigration, Refugees and Citizenship Canada (IRCC) use the tie-break method to rank the applicants who had the same CRS scores.

Tie-break rule applied in this draw saw the date and time used as November 11, 2019 at 8:51:21 UTC. This means that in this invitation round, all candidates with a CRS scores of 687 and above, AND, who submitted their profiles before the mentioned date & time received an ITA from the federal government of Canada. 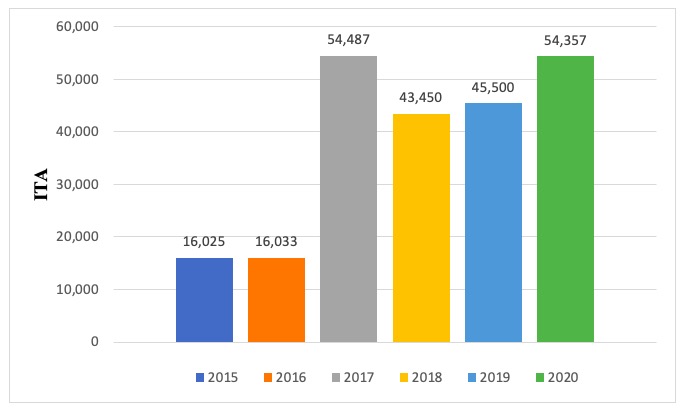 Candidates who are eligible for any of these programs are given a CRS score in the Express Entry Pool. It is based on various factors such as age, work experience, education, and language ability in English and/or French.

The highest-ranked candidates in the pool are then invited to apply for permanent residence through the regular Express Entry draws. Candidates who receive express entry scores below CRS cut-offs can apply for provincial nomination programs, which is another option to trigger an ITA.

As mentioned, provincial nominations can bring-in considerable hike in CRS points, and thereby, an increased chance of the applicant receiving an Invitation To Apply (ITA).