Canada has held yet another all-program draw, inviting Express Entry candidates to apply for permanent residence in Canada. Canada has issued 3,900 Invitations to Apply (ITAs) for permanent residence in a draw that was held on this August 5. To have be invited in this invitation round, candidates were supposed to have a minimum CRS cut-off score of 476.

Every two weeks, 3,900 ITAs were issued by Immigration, Refugees and Citizenship Canada (IRCC), through Express Entry, for almost 2020. Whereas, between March 18 and July 8, IRCC deviated from all program draws, and only focused on candidates in two particular programs.

On July 8, IRCC held the all program draw before going back to program-specific draws again on July 22 and July 23. Seasoned immigration professionals as well as veteran lawyers opine that this may possibly start a periodically alternating trend of invitations issuing, wherein the draws may alternate between all-program and programs-specific.

The number of ITAs released in 2020 was not affected and remained unchanged during the year by the transition in temporary policies in Canada amid this pandemic. The year started with two draws in January of 3,400 ITAs, followed by 3,500 ITAs and a record-breaking 4,500 ITAs in February. Since March 2020, 21 draws have taken place, and nearly 40,000 ITAs have been issued.

The Express Entry system is the application framework for the visa system that administers the pool of applicants from the three main economic immigration classes in Canada. They are:

The highest-ranked candidates in the Express Entry pool are issued ITAs on regular invitation rounds.

This draw was the 25th draw of 2020 and brought the total number of ITAs issued this year to 61,600, a new record till date (see the graphs below). 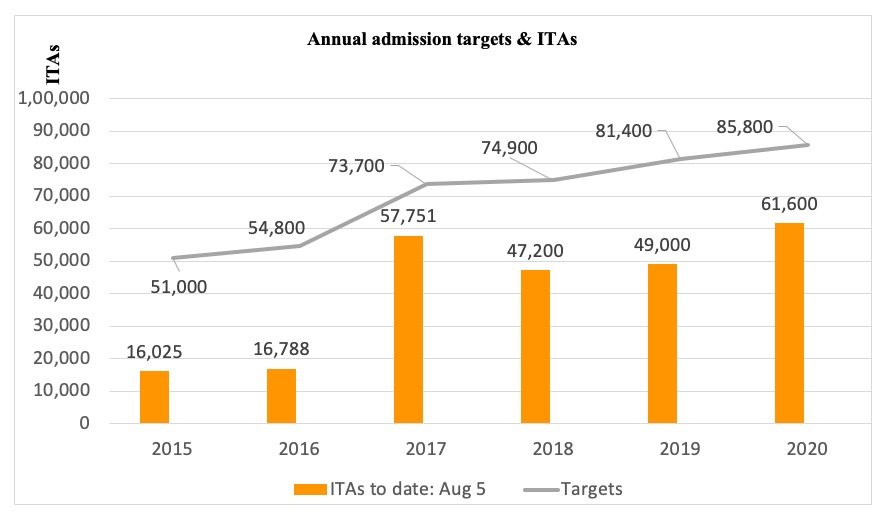 This draw witnessed a minimum score of 476, which is two points lower than the previous all-program draw held on July 8, where a cut-off CRS score of 478. 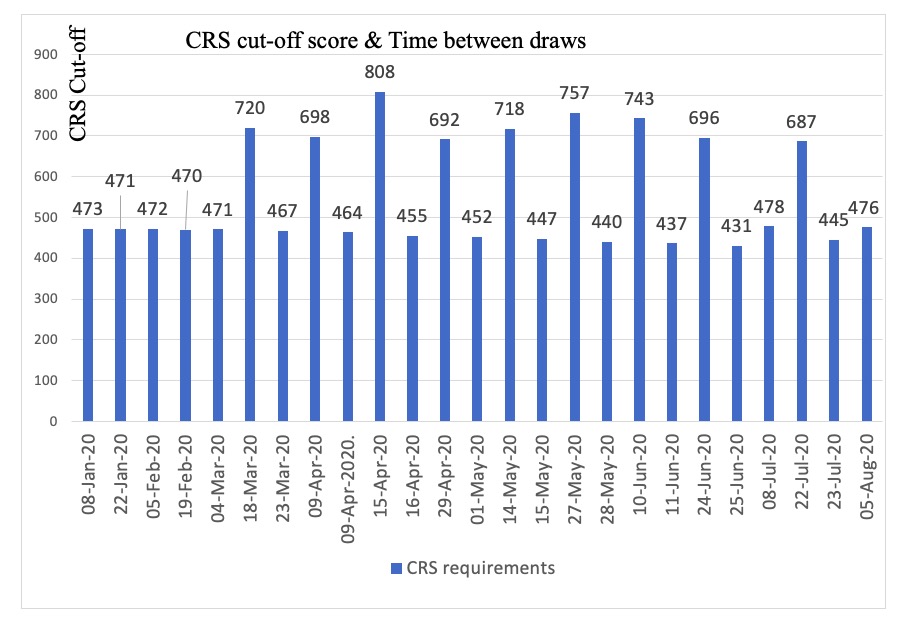 The time duration between successive Express Entry draws is an essential factor that influences the ministry’s fixing the CRS cut-off score. Larger intervals between draws mean more candidates have time to enter a profile in the Express Entry pool.

Tie-break rule applied in this draw saw the date and time used as of July 29, 2020, at 01:02:47 UTC. It means all candidates with a CRS score of 476 and above, and whose profiles entered the Express Entry pool before the mentioned date & time, received an ITA from the federal government of Canada.