Following the coronavirus outbreak, Canada Express Entry ended in the early six months of 2020 by issuing nearly 50000 applications by the immigration council of Canada.

Express Entry Remains the Most Promising of All!

Candidates appearing to meet the minimum entry criteria and registered with Job Bank, if applicable, automatically enter the Express Entry Pool. Once in the pool, candidates are eligible to receive an Invitation to Apply (ITA) for the program(s) which they seem to have met, based on their profile. 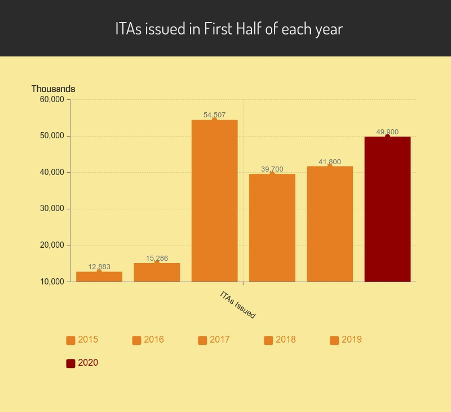 Since the beginning of the coronavirus outbreak, permanent resident arrivals have delayed considerably, with only 4140 new immigrants arriving in April. The surge in ITA figures indicate clearly from the federal government that immigration is at the heart of the recovery in Canada amid the pandemic. The IRCC was compelled to switch for specific program draws such as Canadian Experiment Class and Provincial Nominee Program candidates in Express Entry because of the COVID-19 pandemic.

Candidates in both categories are likely to be in Canada rather than those who come through other Express Entry-linked/aligned programs. Clearly, the 14 draws in the second quarter of 2020 are the most of any three-month period. IRCC has chosen to conduct draws in pairs since the coronavirus pandemic, driving up the number of individual draws. This means that Canada has already carried out 21 Express Entry draws by the beginning of the second half of 2020. In comparison to 2017, which had a total of 30 draws, out of which 17 draws were conducted in the first half in 2017. 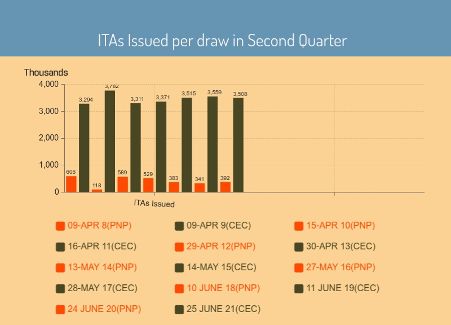 CRS ratings for PNP applicants were much higher as they received 600 extra points in their provincial nomination profile. The PNP CRS scores did not show any significant score, with a peak of 808 points required in the April 15 draw, down to 692 on April 29 respectively. 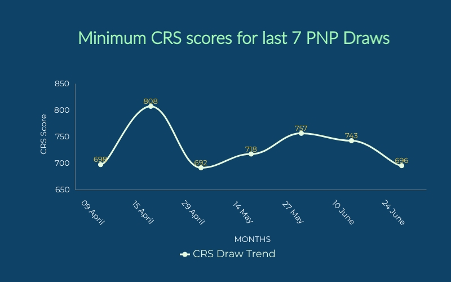 A total of 2,870 ITAs were issued for PNP candidates, which is 11 percent of the total, across the last 7 draws.

Majority of ITAs issued in the second quarter of 2020 were for the Canadian experience class candidates. Over 3,100 ITAs were included in the seven draws from CEC, four of which having more than 3400 candidates being invited. A total of 27,300 ITAs were issues, of those, 24,430 or 89 percent were CEC candidates.

The large number of ITAs in turn ensured that each draw had reduced the minimum CRS requirements. 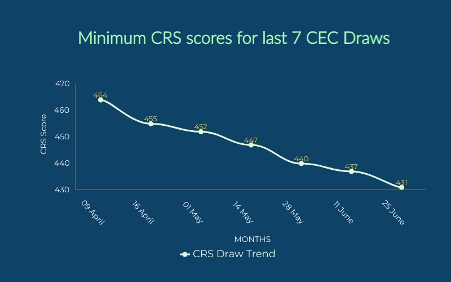 Given that pattern, it appears that the CRS score will continue to fall, as long as IRCC continues to draw a CEC of the same size every two weeks.

Express Entry Draws (Projections) for the 2nd half:

The resumption of permanent resident arrivals and all-program draws depends on how quickly the restrictions are lifted. Based on the economic situation and unemployment in Canada, which had hit hard during the COVID-19 pandemic, seasoned Canadian immigration experts as well as the RCICs of Owlspriority Immigration opine that the CRS draw score should follow a downward trend once resumed.