Home / Latest Immigration News / The CRS score has gone up by 2 points in the 103rd Express Entry draw – something to worry about?

The CRS score has gone up by 2 points in the 103rd Express Entry draw – something to worry about? 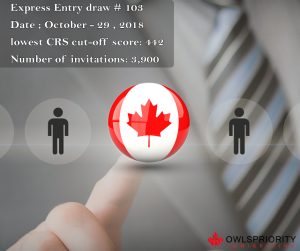 Express Entry draw news: The 103rd Express Entry draw has happened on this October 29th. For the third time in a row, the total intake for the Federal Skilled Workers Class (FSWC) seems to remain as high at 3900, a prediction which we had announced on our original news article dated October 4th.

Though the last draw (which happened on October 15) saw the CRS score drop by 5 points, this time it has risen by 2 points. So, is there something to worry about here? The answer is No. Because, the recent draw trend hovers around 440, 441, 442, 445, and again back to 441 or 442, and so on. In short, the only thing that we can see being constant in these draws is the total intake. It has been an astonishing 3,900 invitations for the third time in a row now. This is surely an encouraging news to prospective applicants compared to the total 3,000 or 3,500 invitations which used to be the usual intake volume before.

Below are the draw statistics of this 103rd Express Entry draw:

This means that all Express Entry profiles that were active in the pool with a minimum CRS score equal to greater than 442, and which entered the pool at (or before) the lock-score (tie-break) timestamp were considered while the Federal Government of Canada issued Invitation to Apply (ITAs) this time.