Home / Latest Immigration News / The CRS score has come down by 5 points!

The CRS score has come down by 5 points! 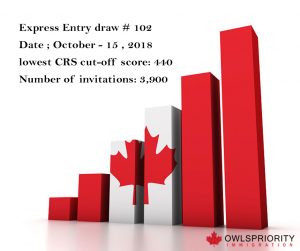 The CRS score has come down by 5 points!

Express Entry draw news: The 102nd Express Entry draw has happened on this October 15th. For the second time in a row, the total intake for the Federal Skilled Workers Class (FSWC)seems to remain as high at 3900, a prediction which we had announced on our previous news article dated October 4th. But what does this mean?

Well, the good news is that the lowest CRS score of the selected candidate has come down from 445 to 400. This means that though the overall volume of applications has increased – as it can be seen from the pool statistics – the number of high-ranking candidates who had applied since the draw that took place on 4 October 2018 has come down. Another peculiar nature – though not so uncommon – is the fact that it happened on a Monday. Express Entry draws usually follow an alternating Wednesday pattern.

Below are the draw statistics of this 102nd Express Entry draw:

This means that all Express Entry profiles that were active in the pool with a minimum CRS score equal to greater than 440, and which entered the pool at (or before) the lock-score (tie-break) timestamp were considered while the Federal Government of Canada issued Invitation to Apply (ITAs) this time.