Home / Latest Immigration News / The Express Entry rounds of invitations have crossed 100 since its inception!

The Express Entry rounds of invitations have crossed 100 since its inception! 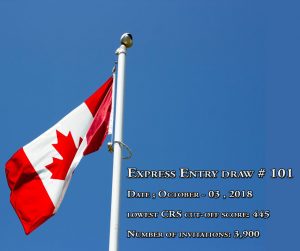 Express Entry Draw News: The 101st Express Entry draw has happened yesterday. After the FSWC Express Entry draw that happened on 5th September wherein a total of 3,900 candidates were invited to apply for Canadian permanent residence, the number of invitations issued dipped again on September 19th when only 3,500 invitations were issued. However, the draw that happened a few minutes back has again invited 3,900 candidates. Whilst the question if the number 3,900 is going to be a repetitive pattern in the upcoming draw trends remain, the factor that more people from all over the globe are now looking at Canada as their light of hope is unquestionable. This is evident from the CRS score of the lowest ranked candidate; it is 445 – a 4 points hike from the previous round of invitation.

This means that all Express Entry profiles that were active in the pool with a minimum CRS score equal to greater than 445, and which entered the pool at (or before) the lock-score (tie-break) timestamp were considered while the Federal Government issued Invitation to Apply (ITAs) this time.